Welcome to Pyramid Lake, a world class fishery, the site of the world record Lahontan Cutthroat Trout (41 pounds) and the only place in the world where the ancient Cui-ui fish can be found. If you have never fished here before, you are in for a visual treat and some exceptional fishing.

Tribal Permits may now be
securely purchased online.
To purchase a permit
CLICK HERE
We No Longer Accept American Express 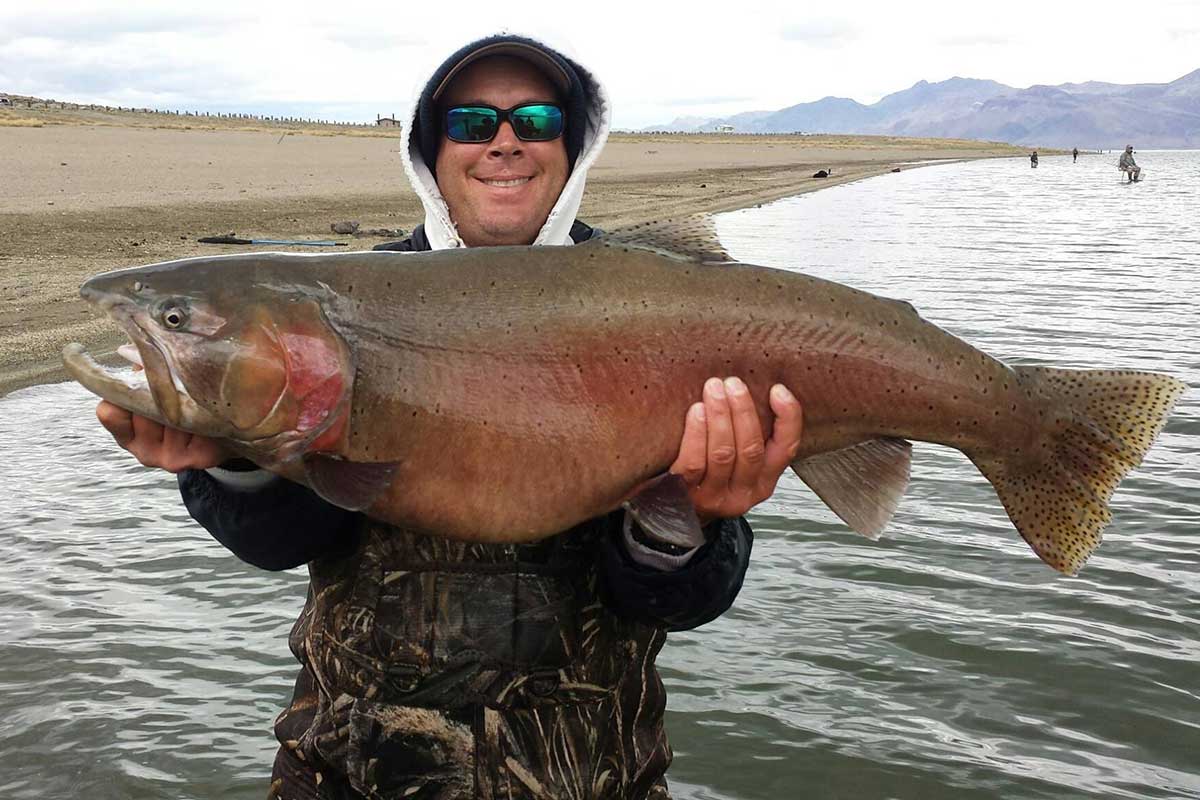 Check out the Pyramid Lake fishing action on YouTube

Pyramid Lake comprises 5 different species of fish within the lake

Cui-ui The cui-ui, Chasmistes cujus, is a large sucker fish endemic to Pyramid Lake in northwestern Nevada. The maximum size of male cui-ui is approximately 53 cm (21 in) and 1.6 kg (3.5 lb) while females reach approximately 64 cm (25 in) and 2.7 kg (6 lb). The life span of cui-ui is typically about forty years, but the fish do not reach sexual maturity until at least age eight. The cui-ui is not only a critically endangered species, but is also one of the few surviving members of its genus. The cui-ui once flourished in Pyramid Lake where it was one of the main foods of the Paiute people (who call themselves Cuyui Ticutta (check on that), translated as “Cui-ui Eaters”). Harvest was achieved using a large 3-way hook which was tied to a lead weight and fastened to a 30-40 foot length of nylon twine.
The cui-ui is a large, cumbrous-looking fish. The head is wide and flat, and the body is long and slender. They are bottom-oriented, and they are not strong swimmers. Adult cui-ui can be distinguished from Tahoe suckers by their generally larger size, larger scales, and smaller lips.

The cui-ui population began to decline after the construction of Derby Dam and the establishment of the Newlands Reclamation Project in 1905. The subsequent agricultural diversions, from the Truckee River to the Fallon area, reduced the amount of water entering Pyramid Lake. As the Lake’s surface elevation receded, down cutting along the river resulted in the formation of a sand-bar delta at the mouth of the river. This delta essentially blocked the cui-ui and Lahontan cutthroat trout from ascending the river to reach their spawning grounds. Both species are obligate fresh-water spawners, and their eggs cannot survive in Pyramid Lake water.

The Tahoe Sucker (Catostomus tahoensis) are native to the Lahontan Basin and are named after Lake Tahoe. They are very similar to the Cui-ui if you have not been trained to distinguish between their differences. One of the distinguishing features is that the Cui-ui has a thin upper and lower lip, whereas, the Tahoe Sucker has a thick lower papillose lip that is incised. When they aspirate, the difference is evident. Hence, better safe than sorry so if you catch one on the hooks, please waste no time in carefully returning to the lake. They are highly predated upon by LCT and contribute to the Pyramid Lake ecosystem.

The Tui chubs are an important indicator of the overall ecosystem health within Pyramid Lake. There are two forms within the lake. One is the Lahontan creek tui chub, S.b. obesa and the Lahontan lake tui chub S.b. pectinifer. They are distinct enough morphologically two classify separately, particularly in their number of gillrakers. They tend to spawn at different times, hence, reducing hybridization. They tend to be dusky olive, brown, or brassy on the back and white to silver on the belly. The younger the fish, the more silvery the body color. LCT predate on them when they are smaller in size. They tend to congregate along the shallows in the summer and dive to depths lower than 61 meters in the winter and are not as active as Spring. The Spring reappearance of the Tui chubs is is observed mid-May. They are primarily foragers but fisheries has observed that they become predators when they are large adults. Sometimes they will bite at lures and are caught by Fisherman to be released.

The Lahontan Cutthroat Trout Oncorhynchus clarki henshawi) are an over 2 million year old fish. Cutthroat trout are named as a result of anglers in the 1880 naming them as a result of their distinctive red slashes below the gill openings. It has been reported that an LCT was caught over 80 pounds (USF&WS, 2007). In 1925, Johnny Skimmerhorn caught an LCT that was 41 pounds. Historically, Lahontan Cutthroat Trout (LCT) occurred throughout the Truckee River drainage from the headwaters in California downstream to Pyramid Lake (Gerstung, 1988). However, multiple impediments have led to the listing of this species as threatened under the Endangered Species Act. Today, the fisheries promotes managing for trophy sized fish and maintaining viability within the ecosystem within the lake.

Sacramento Perch is native to California and is the only non-native species that resides in Pyramid Lake. There are only two resident populations remaining in their native range in Clear Lake and Alameda Creek. However, the reside in other areas primarily due to introduction. They were introduced in Nevada around 1877 and are still present in Pyramid, Walker and Washoe Lakes, as well as other localities in the Truckee, Carson, Walker, and Humbolt River drainages. They are a piscivorous fish and compete with the LCT. However, both the Sacramento Perch and the LCT have coexisted in this ecosystem for some time without any known detriment to the LCT. In fact, it is under suspicions by the Fisheries that the Sacramento Perch are declining in numbers. In this lake, they are found mainly in water less than 15 meters deep. They are adapted to withstand low water clarity, high temperatures, and high salinities and alkalinities. Growth in older perch is mostly in weight rather than in length.

The Sacramento perch fishery is undeveloped, but those anglers who have done their homework to find these fish during late spring and early summer are often rewarded with lots of fish. Because these fish compete with the trout for available forage, the Tribal Council has recently approved dropping the bag limit. Sacramento perch (Archoplites interruptus) are members of the sunfish family. They virtually disappeared from California’s central valley rivers and delta, when their habitat was altered and non native sunfish were introduced. Sacramento perch were unable to compete with the black bass, bluegill and crappie, which raided the perch’s nest. They were first introduced into Pyramid Lake in 1877. Sacramento perch, unlike the introduced sunfish, do not protect their nests and were steadily replaced in the ecosystem by the bass, crappie and bluegill. To catch the perch now, you have to go to one of three places—Crowley Lake near Bishop, Pyramid Lake in Nevada, or Lagoon Valley Lake between Fairfield and Vacaville. The largest recorded Sacramento Perch caught in Pyramid Lake weighed in at 4 lbs, 9 oz (1971), which is the current State record.

For a map of open beaches for fishing
CLICK HERE 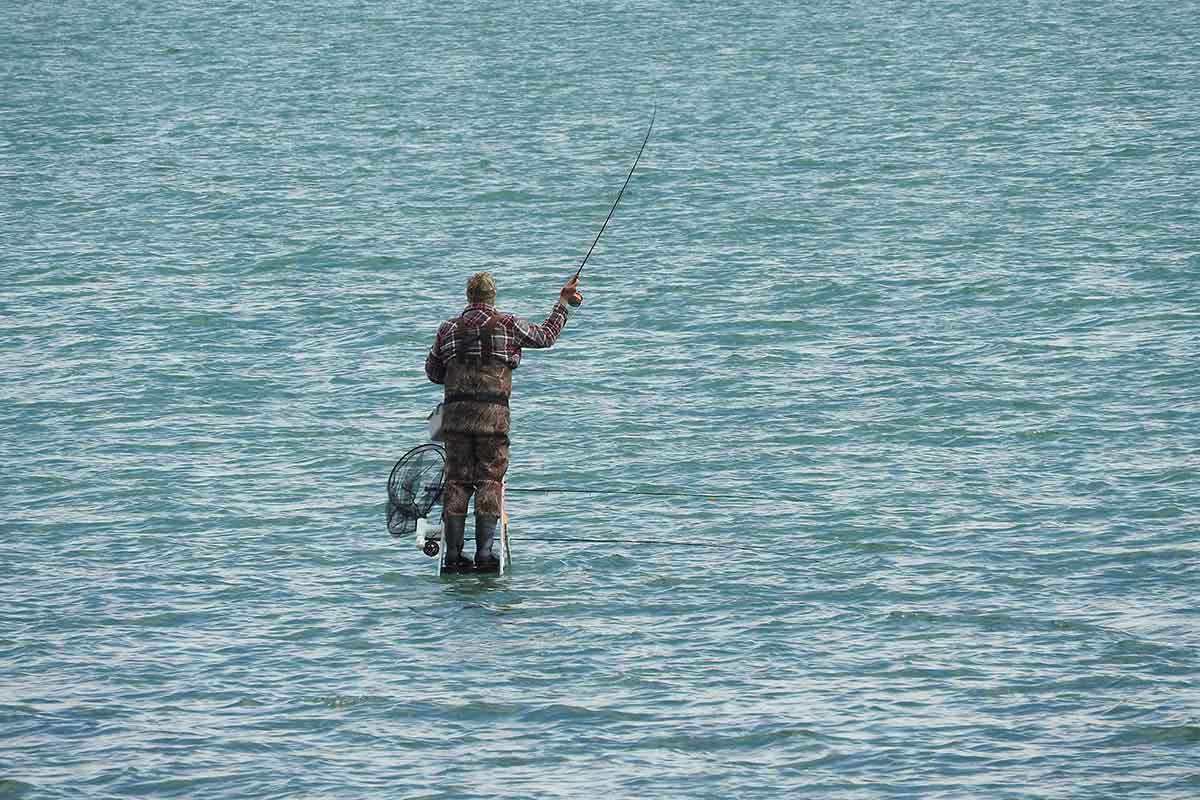 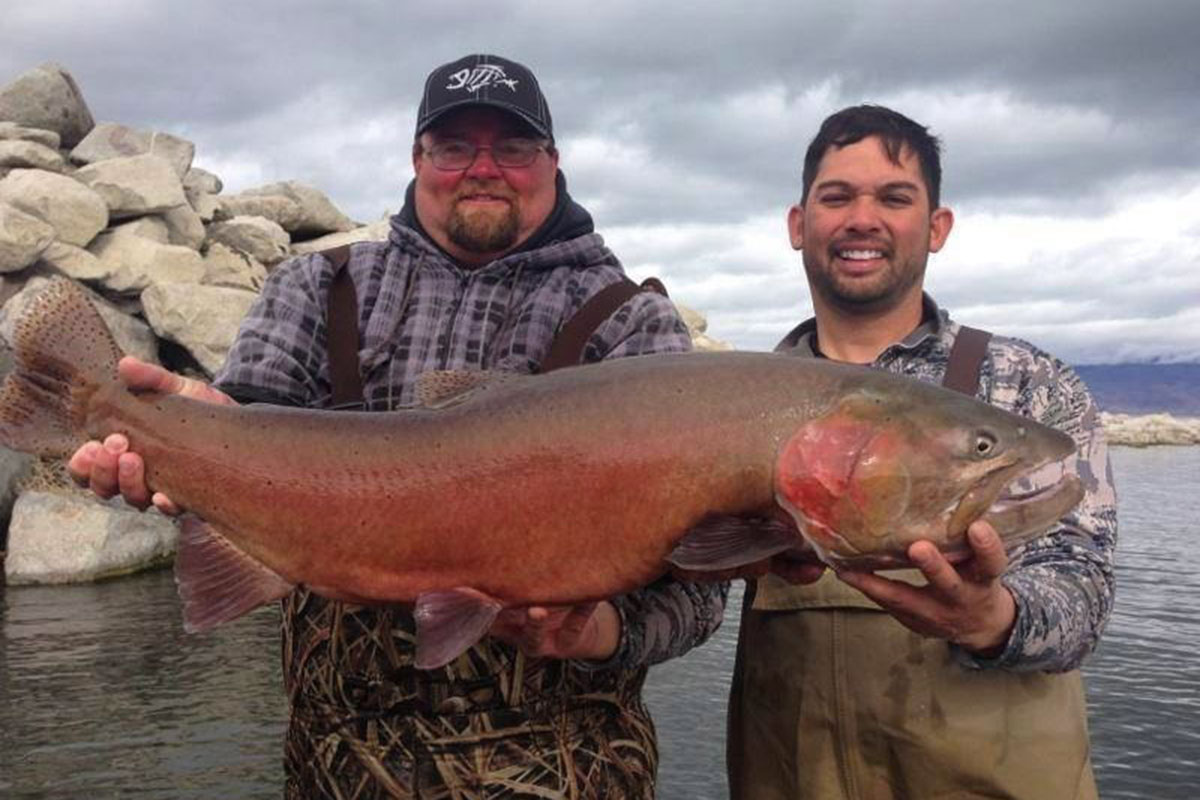 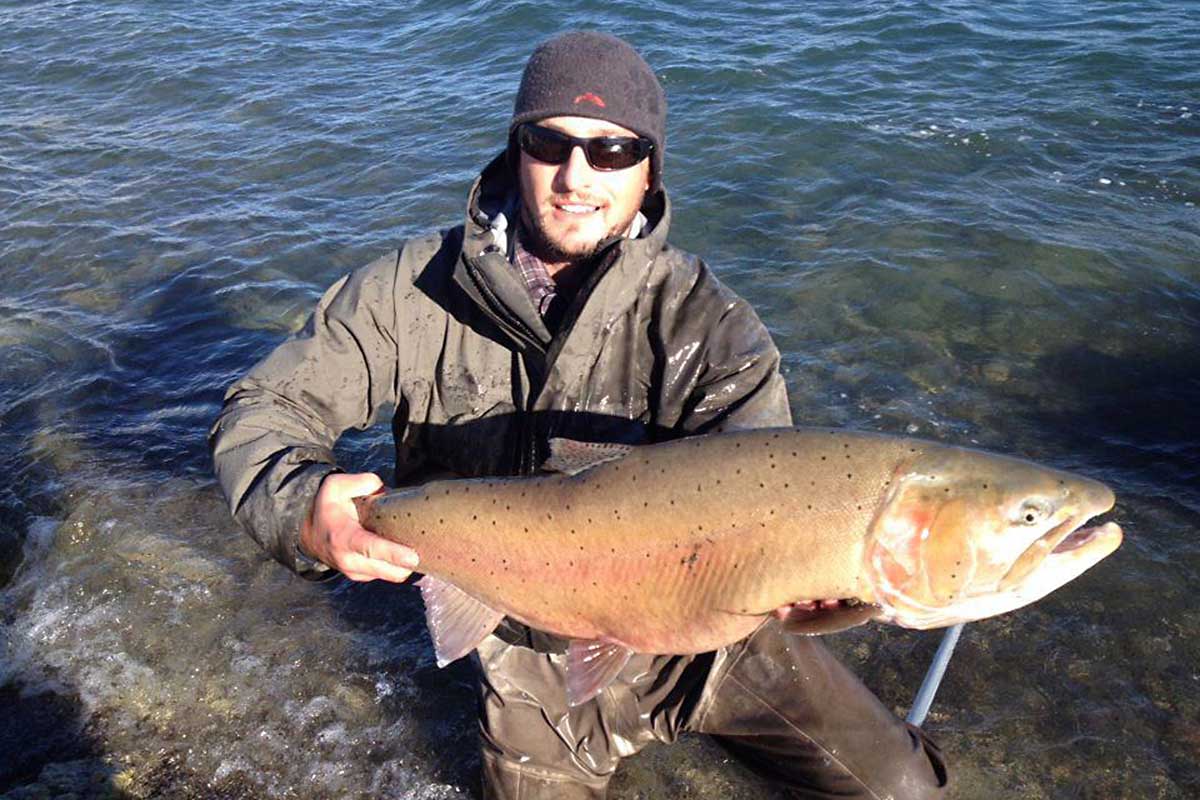